Dear blog,
Sorry for not writing for so long.
Ever since i started work at IIS, i rarely write anymore.
So many things happened lately. Especially my miscarriage.
Yeah, after 8 years, got pregnant but then miscarriage.
Belum ada rezeki lagi. Insya Allah, ada laa tuh nanti.
But it was a GOOD 8 weeks being pregnant again.
Will try again soon. Danial needs someone to play with.
Even though he was reluctant at first. Dah spoilt sangat jadi anak tunggal!

Will be back with more stories. I promise.


- Posted using BlogPress from my iPad
Posted by wawajoe at 10:55 AM 1 comment:

I'm leaving Nobel soon. 9 days to be exact minus the weekends. How time flies. I've been working in Nobel for the last 6 and 1/2 years. It has been a great place to work and i have made my own 'families' there. From being a normal teacher and now a HOD, it was not an easy journey. When we started Nobel (i was one of the pioneers), i have the most workloads teaching the kids BM. My frens made fun out of it since they said my BM tunggang-langgang! Hahahahaha. Siapa kata ajar BM senang, belum try belum tau ok!

Then i was given the task to teach Kajian Tempatan. I love history! Now, i can teach them the History of Kesultanan Melayu Melaka sampailah Tanah Melayu mencapai kemerdekaan without referring to the text. The kids said they enjoyed my lesson sebab i am just like a penglipur lara. I told them stories that is beyond the contents in the text. Especially the boys love to hear stories about zaman penjajahan Jepun, tentang Komunis, about James Brooke and his family yang memerintah Sarawak selama 100 tahun, etc. I am just amazed to hear their comments about me being their KT teacher...

I also taught PE. And Netball. My passion is more towards Netball. I have seen my ex-students who have excelled playing the game. And they still try to make an effort to visit Nobel and played with me. One student said, when i leave Nobel, there will no teacher who is passionate as i am when it comes to Netball. I just laughed at the statement. Not true. There are others who love the game. It's just that time is very limited to be constantly involved with it.

Last Friday, i had my last meeting with my department discussing about Merdeka and Hari Raya project. I only had the meeting twice this year. LOL! My department has the most teachers and some of them are also teaching other subjects. It is sometimes impossible to meet them on Fridays because of other departments meeting. Kena berebut kadang-kala nak jumpa mereka. Agenda pun tak banyak, tuh yg meeting baru 2 kali. And i wrapped up the meeting by apologising to them if i was harsh or cruel to them for the last few years when i was their HOD. Lidah saya kan tajam, takut ada yang terguris pulak!

I know that it is not easy to say goodbye to a place that has been my second home for the last 6 1/2 years. I have a godmother, sisters, brothers which i called my happy family in Nobel. It was not a smooth ride at first, but somehow i managed to get over it. Orang kata, we forgive but we don't forget. Yes, i learnt my lesson from it. My boss said i have grown a lot from being a sensitive person to someone that is matured enough to think about right and wrong. That's how i run my department. If you are wrong, surely will kena from me walaupun awak tu kawan baik saya. Kalau bagus, i will praised you. Tidak ada selindung atau kipas-kipas. Kipas mengipas does not exist in my world (sebab i also didn't know how to do it, tak reti nak cakap putar-belit. Direct to the point lagi senang!). You want to be a successful person, you work hard for it. You might not be acknowledged sometimes, but deep down inside you knew that u have made a difference to the students. Kerja biar ikhlas, i believe in that. And tolerate each other. Manusia tidak dilahirkan sempurna. Kalau ada kekurangan, maafkan aje.

If my teachers are reading this piece, i wanna tell them all of you have done a great job. We are a strong team because we helped one another. No one is taken for granted because everyone is important in the department. You have made a difference in the child's learning process, be it core or non-core subjects. Good job teachers and i will surely miss all of you. Especially to my staffroom teachers. A place we had fun the whole day: cracking jokes, listening to music, karaoke sometimes (that'll be my bff Cherlyn singing to release some tensions) and makan-makan. That is the place i called home. And i am gonna leave my second home to start a new journey after Raya break. Insya Allah.

Where i am going and what i will do is gonna continue in my next piece. Later peeps!

- Posted using BlogPress from my iPad

You were born seven years ago at Damai Hospital through an induced process. Dr Asma encouraged me to have you earlier since the placenta has shown white spots. Dr said the placenta has matured and whatever i ate will not be passed to you anymore. So, i was in pain for almost 24 hours before you were born at the sunrise on 26 June 2004.

I am proud of what you have achieved so far. Yes you do drive me nuts when it comes to completing your homework or doing revisions for exams. You make me scream when you gave excuses not to take your bath. But, i miss those nonsense behaviours when you are away at atuk's place for holidays.

Do keep in mind that i am a very garang mom to you but deep down inside i love you loads and loads! Money can never buy love and happiness. You are the love of my life (besides dad!) and i will always guard and protect you from anything that will harm you physically or emotionally.

Mama and babah love you loads! 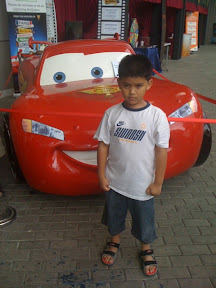 - Posted using BlogPress from my iPhone
Posted by wawajoe at 7:57 PM No comments:

I love my Ipad. It fits my not so expensive mutipurpose bag. It keeps my son busy while i'm driving back to Melaka or anywhere here and there. It connects me with my sisters, cousins, friends around the world. Since I only used it for playing games especially Angry Birds, i find that Ipad is very useful for an amateur like me. Be it for blogging or photo editing.

Saya sayang Ipad saya sebab ini hadiah dari suami. It was unthinkable that he would get it for me. Yes, i appreciate it a lot because it costs a lot. Bukan senang hendak keluar duit beribu untuk membelinya. Leih terasa kegunaannya dari beil handbag.

Posted by wawajoe at 8:08 PM No comments:

Posted by wawajoe at 8:01 PM No comments:

Danial started his mid year exam last week. As a mom and a teacher, saya sangat tension dan stress bila dia nak exam. He is so relaxed and could not be bother to study at all. Is this normal? Alhamdulillah, dia memang takde masalah with his studies. Cuma, kadang-kadang ada big capital M untuk buat revision.

School holidays are just around the corner. Yeay, Langkawi here we come!
I need the break badly.....:(

pictures by my other half